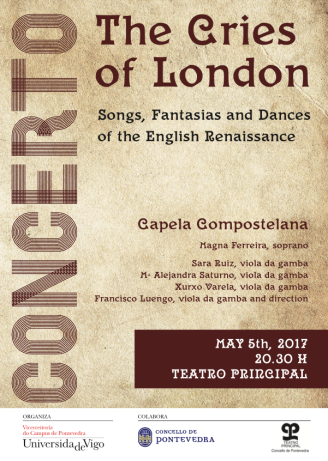 A “consort song” is a type of song that became very popular in sixteenth-century England. Most consort songs consist of a vocalist and several instruments, normally four violas de gamba. The main composers of the English Renaissance wrote this type of song, which was played in churches, the court, or even in domestic spheres, due to the popularity that viols had at the time. In every well-off home there would be a “chest of viols”, with up to six viols of all sizes –alto, tenor and bass– in order to play consorts that might be simply instrumental or with the participation of a vocalist, in the long winter evenings.

The high quality of performance that English violists had is manifested in a wide range of works that demand a considerable virtuosity, although they were intended for students. Probably the earliest and most important composer of consort songs was William Byrd (1543-1623). He composed many of these songs –with both religious and secular themes– fantasias, and instrumental variations, as our programme will show.

Another famous composer of this period was the lutenist John Downland (1563-1626). One of his most outstanding works was Lachrimae”, with 21 instrumental pieces, whose seven pavans were based on the song “Flow my Tears”. We will play this song and a suite of dances: Pavan, Corante, Aria (Almand) and Volta.

Finally, we will play the consort song that gives its title to this programme: “The Cries of London”, in which Thomas Weelkes (1576-1623) creates a consort song out of the cries of London pedlars, and manages to convey the lively atmosphere of the streets of Renaissance London.

Capela Compostelana was formed with the intention to bring back to life the music of the sixteenth, seventeenth and eighteenth centuries. Our performance uses the vocal and instrumental techniques proper to each period and style. We think this is the right way to understand and enjoy works so distant to us in time. Consequently, we try to learn, with humility and respect, the practice of the musicians of those periods.

The members of this ensemble were trained in the areas of early music and either fate or necessity brought them together at the end of the world, which is Compostela.

Capela Compostelana also intends to recover old traditions and liturgies related to Santiago Cathedral, such as the Solemn Vespers and the Consecration Mass in the events organised for the Celebration of the Eighth Centenary of Santiago Cathedral. They also collaborate often with the Terra Nosa Choir and the Music Chapel of the Santiago Cathedral.